running on servers with these operating systems installed. But they likely aren’t as conversant with the most widely used file system for VMware’s vSphere/ESXi hypervisor, VMFS.

VMFS owes its status as the most popular file system for VMware to the fact that it was purpose-built for virtualization. By enabling advanced vSphere features (like Storage vMotion) or powerful VM features (such as snapshots), this cluster-aware file system is a key (but often overlooked) piece of vSphere that must be considered to ensure a successful virtual infrastructure. And the latest version, VMFS 5, delivers a number of updates.

You make be wondering why we need a new file system just for vSphere, when NFS can suffice. There are a number of things that make VMFS special and necessary. Consider the following.

While VMware supports the use of both VMFS (SAN-based block storage) and NFS (NAS-based file storage) for vSphere shared storage, VMware has usually supported VMFS first (and NFS later) when new features are released. Today, there aren’t significant differences to using NFS over VMFS but most people at VMware recommend VMFS (which makes sense as the company designed it just for this purpose). For more information on the VMFS vs. NFS debate, see this post by NetApp’s Vaughn Stewart.

No matter the option you choose, by using shared storage with vSphere, you can use the following advanced features (assuming your version of vSphere is licensed for them):

Keep in mind that shared storage and VMFS (or NFS) are required to perform these advanced features. While you might have local VMFS storage on each host, that local storage won’t enable these features on its own, unless you use a virtual storage appliance (VSA) such as the vSphere Storage Appliance to achieve shared storage without a physical disk array.

With the release of vSphere 5, VMFS has been updated with a number of new features. They are:

While the benefits from these changes may not be immediately evident, they offer the largest volume size and the most efficient virtualization file system yet.

Assuming your server virtualization environment uses VMFS, how do you know what your capacity is, what your VMFS version is and what your block size is? It’s easy: Go to the vSphere Client and then to Datastores and Datastore Clusters Inventory. Click on each datastore and you’ll see basic information on the Summary tab. However, you’ll see more detailed information by clicking on the Configuration tab, as shown below. 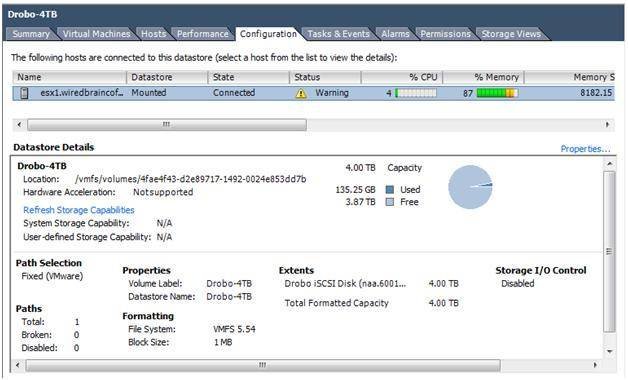 As you can see in the screenshot, this VMFS local storage is using VMFS 5.54 and has a block size of 1 MB block. There is just one path to get to the datastore, and it just has a single extent.

If a datastore is running an older version of the VMFS (like VMFS 3), this is where you would upgrade it from.

If you click on the Properties for the datastore, shown below, you could manage the paths, add more extents to increase the size of the volume or enable Storage I/O Control (SIOC). 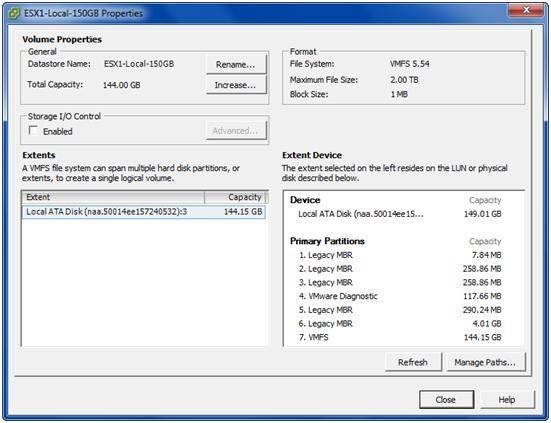 Using the Datastore Browser (accessed from the Datastore Summary tab), shown below, you can look inside a VMFS or NFS datastore and see what’s inside.

Unlike with Windows or Linux file systems, you won’t see any operating system files inside your VMFS datastores. Instead, you’ll just see folders for each of the virtual machines and, inside those, you’ll find the virtual machine VMX configuration file and VMDK file (among other, less important VM files).

David Davis is the author of the best-selling VMware vSphere video training library from TrainSignal. He has written hundreds of virtualization articles on the Web, is a vExpert, VCP, VCAP-DCA, and CCIE #9369 with more than 18 years of enterprise IT experience. His personal Website is VMwareVideos.com.