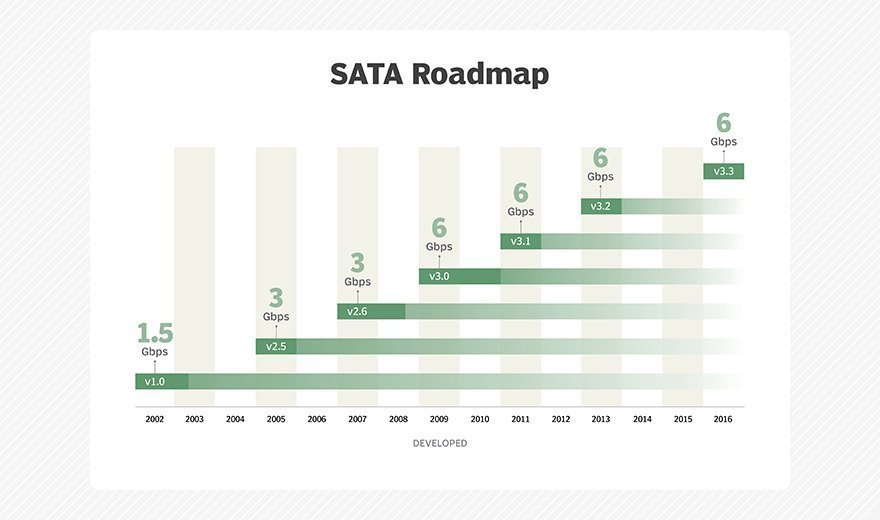 SATA is used to connect a computer to storage devices such as HDDs, SSDs or removable optical devices such as CD-ROMs and DVDs. The SATA specification was a replacement to the older parallel ATA standard. SATA reduced cost, provided faster throughput and added hot swapping.

The SATA specification bears some similarity to SAS, since they draw on protocol information from the same sources, but different standards organizations control the storage networking technologies. SATA uses the ATA interface rather than the SCSI command set to transfer data.

SATA has a cost-per-GB advantage over SAS and is commonly used in enterprise and consumer markets. SATA offers small form factors, such as M.2, to enable the integration of SATA storage into consumer laptops and similar computing devices. SATA has disadvantages to SAS, such as limited diagnostic and error recovery capabilities and comparatively slower performance. SAS technology is available at 12 Gbps, and 24 Gbps SAS is under development.

The first version of SATA emerged in 2002 at 1.5 Gbps. SATA specification version 2.5 followed in 2005, and the data transfer rate doubled to 3 Gbps. In 2009, SATA version 3.0 again doubled the speed over the prior generation to 6 Gbps. SATA drives are backward compatible with each other.

The Serial ATA International Organization has no plans to increase the speed of SATA beyond 6 Gbps. There are electrical constraints for the design, expense considerations and competing technologies available in the market that offer higher data transfer rates.

However, the 3.2 revision of the SATA specification included a SATA Express (SATAe) specification that can boost SATA throughput from 6 Gbps to 8 Gbps. SATAe is a hybrid connector that supports both SATA and faster PCIe 2.0 and PCIe 3.0 interfaces for SSDs. SATAe has not seen widespread adoption.