This content is part of the Essential Guide: EMC World 2014 conference coverage

At EMC World 2014, the storage giant said ViPR 2.0 will ship over the next few months with support for Hitachi Data Systems (HDS) arrays and commodity storage. Support for third-party and commodity storage was one of the features EMC emphasized when it disclosed plans for ViPR at EMC World 2013. But the original ViPR release last November only supported NetApp and EMC's own arrays. 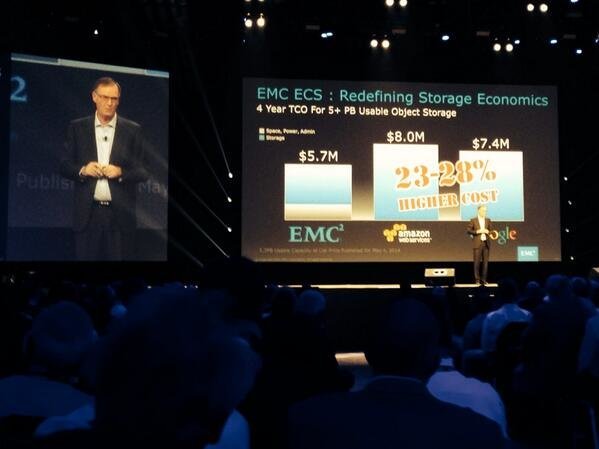 EMC also launched the EMC Elastic Cloud Storage (ECS) Appliance -- known as Project Nile during its beta -- for public and hybrid clouds. The unified system uses ViPR running on the vendor's Atmos hardware, and will scale to 2.9 PB in one rack. EMC bills ECS as a way to build cloud storage cheaper than going to public clouds.

EMC said ECS will support object, HDFS, file and block storage, and provide self-service and multi-tenancy needed for cloud storage. It is expected to become generally available by the end of June with single rack configurations of 360 TB, 1.4 PB and 2.9 PB for object storage, 120 TB and 240 TB for block storage and 120 TB, 360 TB and 1.4 PB capacities for mixed workloads.

"ViPR 2.0 is the architectural backbone that all of our storage technologies will hang off of," said Jeremy Burton, EMC president of products and marketing.

ViPR manages the storage infrastructure -- control plane -- through the ViPR controller, and it manages data through ViPR data services.