Cloud storage services for data protection and other applications are currently used by 44% of companies that responded to a recent TechTarget survey. That number should grow over the next six months or so, as 46% said they plan to increase their use of cloud data storage services. For the most part, cloud storage users are quite satisfied with the services they're using: 17% rate their experience to date as "outstanding," 59% said it has been "good" and only 3% expressed disappointment.

Similar cloud storage usage statistics were reported in a Purchasing Intentions survey conducted earlier by TechTarget's Storage Media Group -- 29% of respondents were using cloud storage for non-backup applications, and 33% noted the use of cloud backup services. 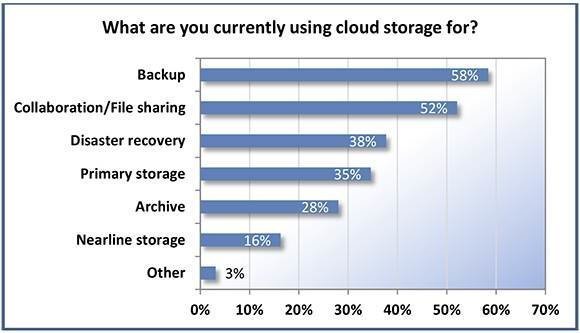 At this time, it appears that most companies using cloud storage for DR do so in conjunction with another DR methodology. For example, 39% ship data to a separate physical recovery site in addition to using the cloud for DR; for 30% of those surveyed, DR data also goes to tape. Right now, 46% of cloud DR users can use cloud-based computing services in conjunction with their cloud storage to recover and resume operations in the cloud.

Most cloud storage users (57%) still rely on service provider-supplied software to access their cloud storage services. Another 18% use locally installed software that can link to cloud storage, while a similar number use on-premises appliances to create a more seamless hybrid cloud environment. The appliance market is largely populated by startups, but Microsoft's recent acquisition of StorSimple, one of the pioneers in this field, should spur even greater interest in this access alternative. While the overall number of appliance users is still relatively modest, 29% of larger companies and 39% of midsized companies currently use appliances.

While cloud-based DR and archiving are on the rise, backup is still the most popular app among cloud data storage services. On average, companies in our survey reported having approximately 8.5 terabytes (TB) of backup data stored in the cloud. Seventy-five percent of cloud backup users have less than 10 TB of cloud backup data, but 11% have more than 20 TB of their backup data stored in the ether. Assuming the data is deduplicated and compressed, that figure is likely to represent 100 TB or more of source data.

The type of data companies are backing up to the cloud varies considerably, with user files accounting for the most backup data (72%), closely followed by data from the main data center (66%), mobile users (41%) and remote offices (41%). 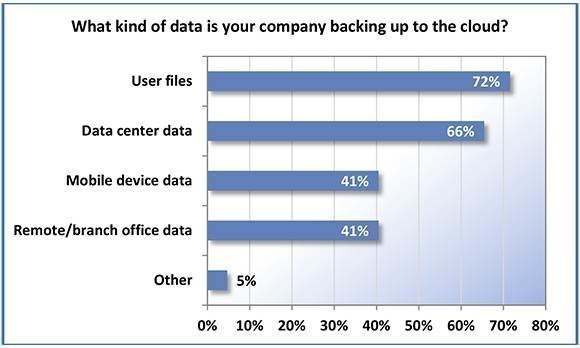 But not just backup

Backup may be king of the storage cloud with DR closing the gap, but companies are using cloud storage for other applications. Survey respondents said that on average, 35% of their companies' applications are currently tapping into cloud storage. An eye-opening 25% of those users tell us that 50% or more of their companies' apps have data stored in the cloud. Here, too, you can expect those numbers to rise in the short term, with 42% of respondents expecting that more than half of their apps will be hooked into cloud storage within six months. 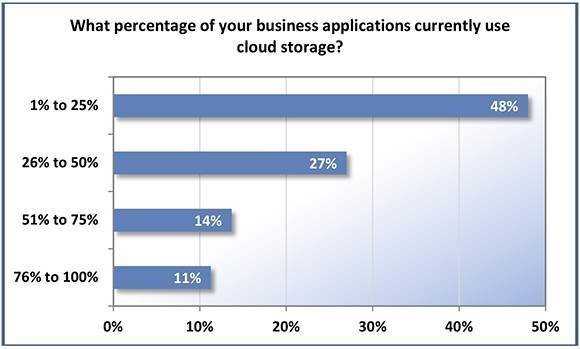 Right now, companies have an average of approximately 7.5 TB of non-backup data stored with a cloud data storage service, and they anticipate that figure to rise to 10.9 TB over the coming months.