The number of organizations doing storage tiering today is approximately the same as three years ago, but tiering practices are becoming more sophisticated.

Common wisdom says solid-state storage -- because it’s such a hot performer but costs a pretty penny -- has pushed IT shops to tier their storage resources. Yes and no. The number of firms tiering storage today is about the same as three years ago (55% vs. 51%), but tiering practices are getting more sophisticated with the addition of solid-state. In 2008, 16% said they used solid-state storage for tier 0; today, 42% have replaced spinning disks at the max tier. Still, most firms top out at tier 1 using Fibre Channel (FC) arrays with 37% using 4 Gbps FC and 26% tiering on 8 Gbps FC. Regardless of what makes up your tiers, the sheer number of tiers can be a critical management factor. Users have learned to keep it simple: three years ago 24% reported four or more tiers, but now only 14% own up to so many. That’s good, because 31% still use manual methods to move data among tiers, 26% have automated and 39% say their tiering is somewhat automated. 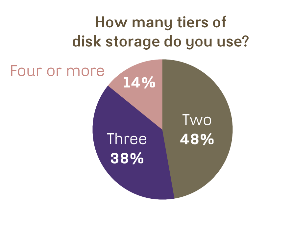 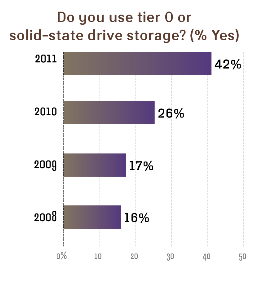 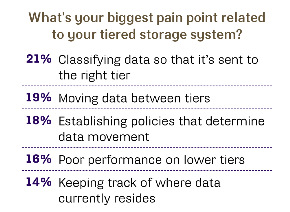 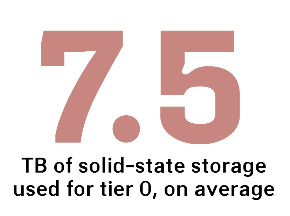 “The process really needs to be fully automated as the volume of data we are dealing with (1.3 PB) is beyond our capability to manually control fully.”

Article 4 of 9Next Article