About the Storage Purchasing Intentions survey

The Storage magazine/ SearchStorage.com Purchasing Intentions survey is fielded twice a year; this is the ninth year the survey has been conducted. Storage magazine subscribers and SearchStorage.com members are invited to participate in the survey, which gathers information related to storage managers’ purchasing plans for a variety of storage product categories. This edition had 699 qualified respondents across a broad spectrum of industries, with the average company size measured as having revenue of $1.4 billion.

Budget cycles for the last couple of years have been slightly less brutal for data storage managers as business slowly nurses an ailing economy back to health. In the latest edition of the Storage magazine/SearchStorage.com Storage Purchasing Intentions survey, the data provided by the 699 survey respondents paints a picture of cautious optimism: Things are getting better, but maybe not all that quickly.

Respondents represent all industry sectors, led by computer-related businesses (13.9%), financial services (11.5%), health care/pharmaceutical (10.3%), manufacturing (8.5%) and education (7.7%). The average number of employees at the participating organizations was 19,744, but the dividing line is 1,000 employees -- half the respondents were above that mark and half were below.

The average company revenue came in at $1.4 billion, which is consistent with the results from our last four surveys over a two-year period.

In our spring 2011 survey, respondents indicated their storage budgets would rise 1.8% higher than their 2010 budgets, which was a fairly healthy jump over the measly 0.6% reported previously. We frequently see budgets adjusted upward from their spring marks, and while that trend continues with the current survey, it does so with a very modest uptick of just 0.1 points. Larger companies are showing a stronger recovery, with a 5.1% change over 2010’s budget. Midsized organizations saw a 2.1% rise, which is approximately half a point higher than a year ago; smaller companies are still struggling with basically flat budgets that grew by only 0.4%. 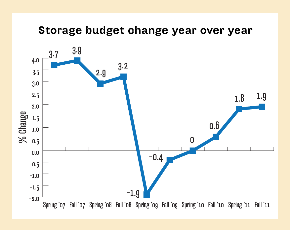 Going back to our very first Storage Purchasing Intentions survey nine years ago, disks and disk subsystems have always accounted for the biggest chunk of storage budgets. This year follows form with 37% of budgets (the biggest slice by far) earmarked for storage systems. The percentage has hovered in the high 30s to low 40s despite dramatically declining disk prices largely because companies now need so much more disk (and other storage) to accommodate off-the-chart data growth. The average installed disk capacity is 269 TB, the highest number we’ve seen in the three years we’ve been asking this question. For 2011, storage managers expect to add an average of 42 TB of new disk capacity, ranging from 20 TB for small companies up to 86 TB for enterprises.

CURRENT INSTALLED CAPACITY AND CAPACITY TO BE ADDED 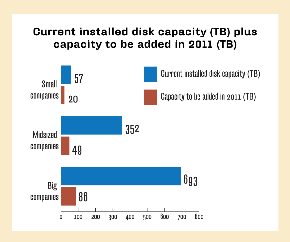 Enlarge CURRENT INSTALLED CAPACITY AND CAPACITY TO BE ADDED diagram.

33% will increase management software spending, mainly to manage more with the same staff

USING, PLANNING TO USE OR EVALUATING SOLID-STATE STORAGE 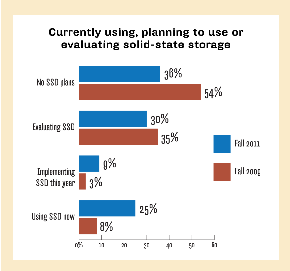 Enlarge USING, PLANNING TO USE OR EVALUATING SOLID-STATE STORAGE diagram.

You’d be hard-pressed to find many data storage managers who aren’t giving cloud storage service offerings a serious once-over, but it may be a little tougher to find companies ready to commit to the cloud. We continue to see incremental growth and sustained interest, with approximately 21% of those surveyed using non-backup cloud storage services to some degree. Two years ago, only 14% said they were cloud users, so while the overall numbers may still be somewhat small, the growth is real. Disaster recovery (DR) is the most popular application for cloud storage, while the most likely suspect, remote offices, continues to lag. Among companies that aren’t yet using any cloud storage services for primary or near-line applications, only 54% flatly rule out adding cloud services, although another 26% are uncertain if they’ll add cloud to their storage mix. 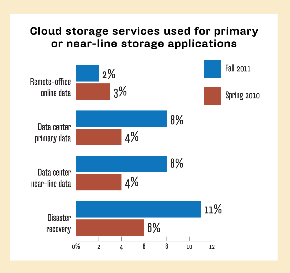 TYPE OF STORAGE BEING USED FOR VIRTUALIZED SERVERS 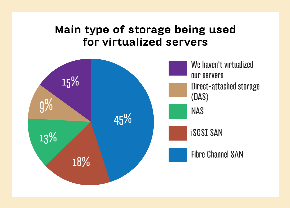 Enlarge TYPE OF STORAGE BEING USED FOR VIRTUALIZED SERVERS diagram.

Take disk-based backup, deduplication, virtual servers and cloud backup, and you would probably figure data protection doesn’t look anything like it did a few years ago. Well . . . yes and no. Backup tends to change very slowly. For example, the “tape is dead” dirge is on continuous play, but new tape techs continue to emerge. Yes, we’re using it less -- 73% spin off some/all backups to tape vs. 85% three years ago -- and libraries are shrinking (an average 96 slots vs. 150 five years ago), but tape is still a key part of backup and archiving. And while dedupe seems like just another feature by now, not even one-third of our respondents are using it today. Virtual server backup is in the spotlight as backup app vendors tap into VMware’s APIs to make the process less painful, but 35% still just load a backup client into each VM. Cloud backup adoption is slow too, with 28% using some form of cloud backup, a number that has doubled vs. three years ago. But it’s been up and down the last two years, which might indicate more tinkering than commitment.

USE OF CLOUD BACKUP SERVICES 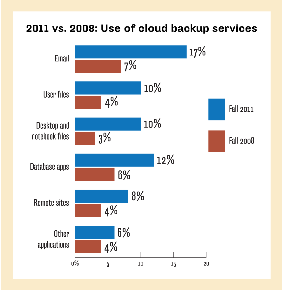 Efficiency is still in vogue

One of the lasting effects of the punishing economy is a new emphasis on efficiency. Technologies like thin provisioning gained a solid foothold over the past few years, while newer techs, like primary data deduplication and compression, are stirring up plenty of interest if not a lot of product choices (yet). Data storage tiering languished when it was called information lifecycle management (ILM), but has taken on new life as an enabler for the efficient use of solid-state and spinning disk technologies. Data archivers, typically implemented for compliance and storage management, are used by 70% of respondent organizations, and 48% are looking to add new data archiving capabilities this year. 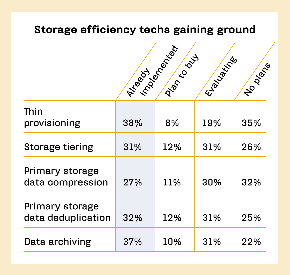 Article 2 of 9Next Article