If it hasn't done so already, NetApp is shaking off that "only NAS" label with yet another big win in the Quality Awards for Enterprise Arrays.

Products in the survey

These products were included in the seventh Quality Awards for Enterprise Arrays survey (the number of responses for finalists is in parentheses).

*Too few responses to qualify

By now, everyone should be convinced: NetApp Inc. is an enterprise data storage powerhouse and not just a major network-attached storage (NAS) player. For the fourth survey in a row, NetApp has won top honors in the Storage magazine/SearchStorage.com Quality Awards for Enterprise Arrays (including one shared win with EMC Corp.). As it did the last time out, NetApp won on the strength of top scores in four of the five rating categories to roll up an overall average rating of 6.69.

But NetApp’s margin of victory over second-place finisher IBM (6.61) was slim, which reflects how close the competition was in all the rating categories. Hitachi Data Systems Corp. was also in the hunt, ultimately coming in third with a strong overall 6.46, followed by EMC (6.30) and Hewlett-Packard (HP) Co. (6.25).

The Storage magazine/ SearchStorage.com Quality Awards are designed to identify and recognize products that have proven their quality and reliability in actual use. The results are derived from a survey of qualified readers who assess products in five main categories: sales-force competence, initial product quality, product features, product reliability and technical support. Our methodology incorporates statistically valid polling that eliminates market share as a factor. Our objective is to identify the most reliable products on the market regardless of vendor name, reputation or size. Products were rated on a scale of 1.00 to 8.00, where 8.00 is the best score. A total of 213 respondents provided 320 system evaluations. 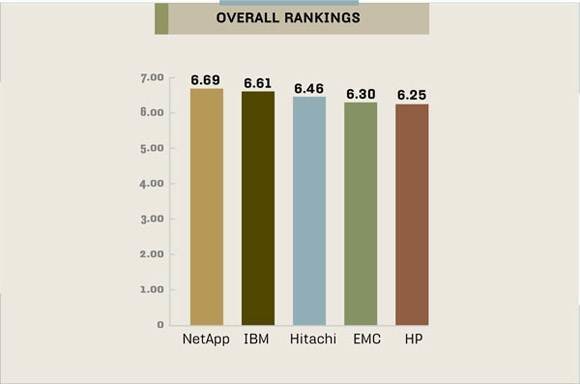 The five vendors that garnered enough evaluations to be finalists racked up solid scores with every product line earning a 6.00-plus score in each rating category. Breaking the scoring down even further, there were only two sub-6.00 scores for single statements within all five categories. Net-App’s attempt at a clean sweep of all five categories was thwarted by IBM, which copped top honors for product reliability. Both vendors netted remarkably consistent scores, but the narrow margin NetApp was able to maintain over Big Blue in the other four categories was enough for an overall win. This was a repeat performance for NetApp; the vendor prevailed in the same four categories in the previous Quality Awards for Enterprise Arrays. 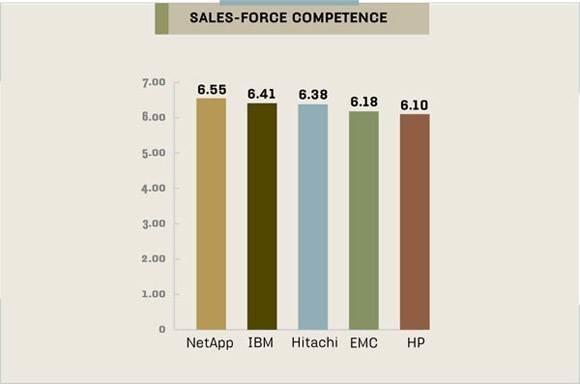 NetApp (6.55) scored highest on four of the six statements in winning this category, which measures the effectiveness of a vendor’s sales team in paving the way for a successful implementation. Hitachi (6.38) drew top marks for the other two statements, but it was just barely nudged out by IBM (6.41), which finished second. NetApp’s top scores were for having flexible sales reps (6.71) and knowledgeable sales support teams, but it outdistanced the field fairly handily for being easy to negotiate with, with a score of 6.56 that easily topped second-place IBM (6.19).

Considering all five finalist vendors, their average 6.33 category score for sales-force competence is second only to the 6.37 from the last Quality Awards. 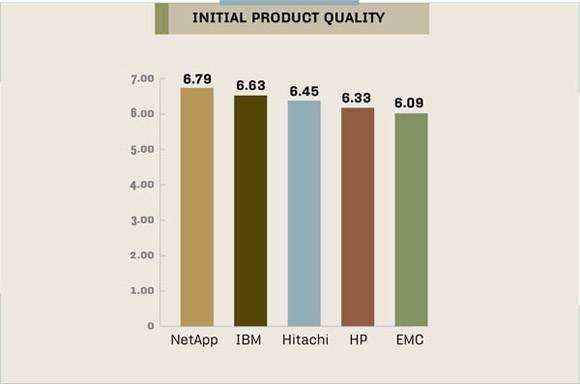 NetApp apparently knows that a good first impression can go a long way; its 6.79 in the initial product quality category was its highest score overall and represented its largest margin of victory. It’s also the highest rating we’ve ever seen for enterprise arrays in this category. Still, IBM’s 6.63 wasn’t all that far behind and good enough for second (and the third best ever recorded); Hitachi’s 6.45 gave it another third-place finish. NetApp had the high scores on five of the six category statements to highlight an usually consistent performance, with statement scores ranging from 6.63 to 6.88.

Array deployments must be getting easier; the best across-the-board score was a 6.58 for “I am satisfied with the level of professional services this product requires.” 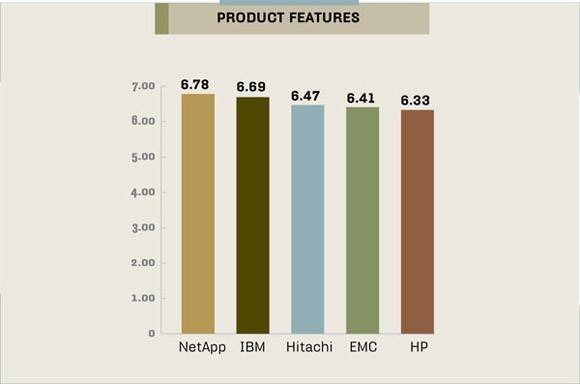 Eventually, any array evaluation comes down to features, and NetApp doesn’t fall short by that measure either, posting top marks for five of the seven statements in this category. NetApp was again very consistent, but showed particular muscle with a 6.98 for replication features and a 6.89 for mirroring features. IBM was tops for the other two statements, including a 7.00 for “Overall, this product’s features meet my needs.” That 7.00 score was one of only two 7.00-or-better statement scores for all categories and all vendors in the survey.

For seven Quality Awards for Enterprise Arrays, no vendor has ever been the overall winner without scoring highest in the product features category. 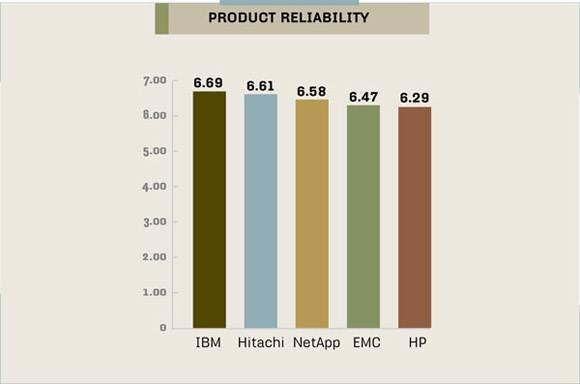 IBM picked up high scores on three of the five statements in the product reliability category on its way to a 6.69 average, which was good enough for a win over Hitachi (6.61) and NetApp (6.58). IBM was strongest for requiring very few unplanned patches, meeting service-level agreements and for providing comprehensive upgrade advice. With a second-place showing, Hitachi stepped up a bit from its third-place finishes in all the other categories. NetApp’s weakest statement score was for nondisruptive patching, which kept it from a sweep of all the categories.

IBM was a model of consistency in the product reliability category, with scores ranging from 6.54 to 6.79. 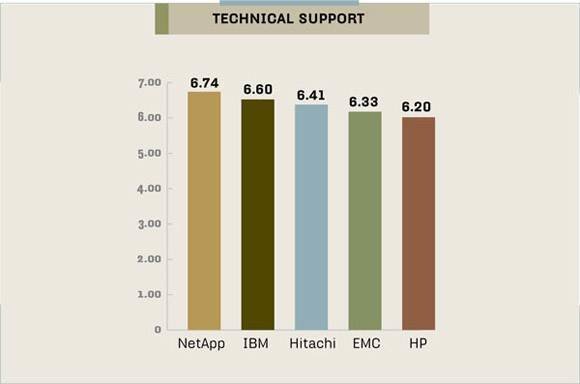 NetApp returned to form in the technical support category with a 6.74, the highest ever rating in the Quality Awards for Enterprise Arrays, which surpassed its own mark of 6.70 in the last survey. NetApp led the group on seven of the eight category statements, highlighted by a 7.00 for “Vendor supplies support as contractually specified.” Second-place IBM (6.60) had another strong showing, including a statement win with a 6.72 (to Net-App’s 6.70) for having knowledgeable third-party partners. All the vendors fared well in this critical category, with Hitachi (6.41), EMC (6.33) and HP (6.20) rounding out the field.

Enterprise array vendors are delivering as promised: The highest across-the-board average for all vendors was 6.67 for supplying support per contract.

Would you buy it again? 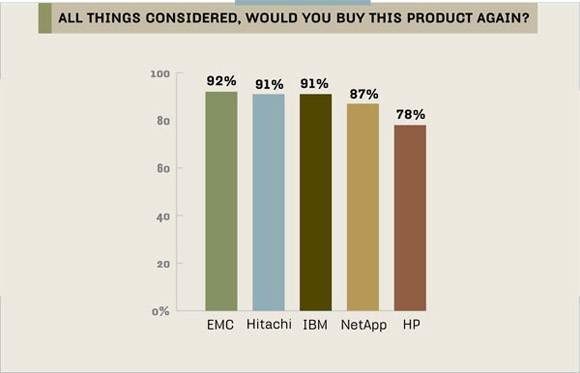 When we ask our survey respondents if they would buy the same array again given what they know now, we’re often surprised when those responses don’t match up with the rating category scores. Once again, we have a discrepancy, but overall satisfaction levels appear to be high, with 88% saying they would take the same plunge. Eight-seven percent of NetApp users said they would buy that vendor’s product once more—a solid rating, but good enough only for fourth place behind EMC (92%), Hitachi (91%) and IBM (91%). 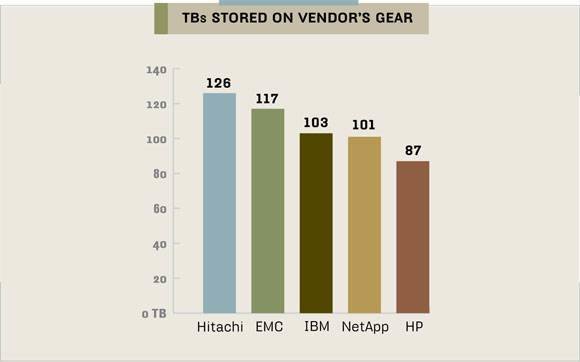 It’s hard to say what kind of reasoning figures into respondents’ “buy again” replies. Often, it’s as much a case of familiarity as anything else, but how much they rely on their arrays and how much data they pile into them might also be factors. Home to an average of 126 TB, Hitachi’s systems are clearly the workhorses of this group. EMC’s systems aren’t much off that mark, with an average of 117 TB; IBM’s and NetApp’s products both host an average of more than 100 TB.