Most IT shops are still relying on traditional backup apps with their server clients to back up virtual servers, but that approach has its limitations. Today, there are plenty of good alternatives for virtual machine backup.

With multiple VMs competing for processing, storage and networking resources, contention for those resources is the No. 1 challenge of virtual server data protection. Concurrent backup jobs on multiple virtual machines can seriously impact the performance of applications hosted on those VMs. And when traditional backup methods are used to protect virtual servers, some key capabilities are sacrificed, such as application-consistent data protection and the ability to restore sub-VM-level objects such as files without having to restore the whole virtual machine. As virtual servers proliferate in the data center, there's a clear call to IT managers to rethink their backup strategy to efficiently protect VMs and the applications they host.

Contemporary virtual server environments can be protected using one of the following backup methods:

Backup agents on VMs. Backing up virtual machines by placing backup agents on each VM extends the most popular backup method of physical servers into the virtual server realm. Instead of having one backup agent per physical server, each VM gets its own agent and backup jobs run independently for each virtual machine. This approach is workable as long as the number of VMs is small; as the number of VMs per hypervisor grows, resource contention will create performance problems. Besides being able to leverage an existing backup product and approach, a backup agent can be the most straightforward way of ensuring application consistency. For many apps, especially non-Windows applications and applications that aren't integrated with Microsoft Volume Shadow Copy Service (VSS), backup agents may be the only way of ensuring application consistency of backup data.

Continuous data protection. A CDP product that runs on each VM is one step up from backup agents running traditional full and incremental backups. A CDP product captures changes on an ongoing basis and puts a much smaller burden on the host machine than traditional backups do. CDP products work either at the file or block level, and usually provide integration with mainstream applications to enable restoring to consistent points in time. In addition to large backup application vendors that have added continuous data protection to their suites, CDP products are offered by a list of smaller vendors such as FalconStor Software Inc., InMage Systems Inc., Vision Solutions (acquired Double-Take Software) and others.

VM image backup on the hypervisor using a backup proxy server. Backing up VM images on the hypervisor, rather than backing up virtual machines via agents within each VM, is appealing for many reasons: it enables efficient backups with little processing overhead; eliminates the need to install and manage backup agents on each VM; and by centralizing the backup of all VMs at the host, the backup of multiple VMs can be orchestrated to minimize performance problems and resource contention. To offload the backup task from the hypervisor machine, VM snapshots are usually replicated or mounted to a backup host or proxy server, minimizing the performance impact while backups are performed.

Host-side VM image backup, however, is usually only acceptable if virtual machines can be backed up in a consistent state; all major hypervisor vendors have added the ability to quiesce a VM while a snapshot of the VM image is taken. Another challenge with VM image backup is restoring granularity. While some backup products are only able to restore virtual machines, others are able to restore sub-VM objects such as files. Consistent data protection of apps within each VM is more challenging with VM image backup than it is with backup agents within virtual machines. Application-consistent data protection is usually limited to applications that are integrated with VSS. For apps that aren't integrated with VSS, crash-consistent backups may be the only option; but if application consistency is required, backup agents on VMs are the way to go.

Without question, the trend is toward VM image backup at the hypervisor level and offloading the backup task to a proxy backup server -- and as the number of virtual servers grows it becomes even more relevant. Mechanisms to enable efficient VM image backup and capabilities vary significantly between Citrix XenServer, Microsoft Hyper-V and VMware vSphere.

Deduplication. Operating system VM images are very similar and ideal for deduplication, so dedupe is a must-have feature. Deduplication at the source (hypervisor), as provided by Arkeia Software, EMC Avamar and PHP Virtual Backup, is preferable to deduplication on the backup target.

Backup verification options. Not all backups succeed, so options that help verify backups without having to restore them are a tremendous boon. Veeam Sure Backup provides for automated startup and testing of backups.

Data protection has been a sore spot for VMware and it took VMware until vSphere 4 to get it right. Prior to vSphere 4, VMware provided VMware Consolidated Backup (VCB) to offload backups from hypervisors to a proxy server, but it wasn't widely adopted due to some grave shortcomings. With VCB, snapshots of virtual machine disk (VMDK) images were taken and copied in full to a proxy server from which backups were run. Offloading the backup to a proxy server minimized the impact of backups on VMs, but it required additional storage for the snapshots.

"VCB was clumsy and the biggest problem with it was how to size the proxy server to where all snapshots needed to be copied," said Lauren Whitehouse, a senior analyst at Milford, Mass.-based Enterprise Strategy Group (ESG).

The vSphere 4 vStorage APIs for Data Protection (VADP), the successor to VCB, addresses the shortcomings of VCB. To start with, VADP no longer requires copying data to a proxy server; instead, snapshots can now be mounted to a proxy server where they're backed up to disk or tape. While VCB only supported taking full snapshots of a VMDK, regardless of how much it changed, VADP supports efficient snapshots via its change block tracking (CBT) feature. CBT keeps track of changes within a VMDK at a block level and enables efficient snapshots of changes only.

To back up a VM via VADP, a "quiesce" command is sent to vSphere to instruct the VM to flush data in memory to disk and no longer accept writes. If VMware Tools is installed on the VM, VMware Tools can pass on the "quiesce" to VSS-enabled applications on the virtual machine to also "freeze" applications within the VM. A snapshot is then taken; on completion of the snapshot, the "freeze" is removed from the VM and VSS-enabled applications. Finally, the snapshot is mounted to the backup proxy from where it's backed up to disk or tape.

Thanks to VSS, Microsoft got data protection for Hyper-V right from the get-go. In many ways, a VMware VADP backup cycle resembles backing up Hyper-V. A backup app dispatches a "quiesce" command to a Hyper-V VM via VSS to flush data in memory to disk; VSS then takes a snapshot and removes the freeze from the VM. Similar to VADP, the snapshot can then be replicated or mapped to a dedicated backup proxy server. The "quiesce" can be extended to VSS-enabled applications within VMs, but requires the so-called backup integration service installed on the VM, akin to VADP requiring VMware Tools.

VSS depends on several main components (see "Microsoft Volume Shadow Copy (VSS) component," below): VSS-enabled applications need to implement a so-called VSS-writer that coordinates various components to create consistent shadow copies of one or more volumes. Applications, such as a backup application, need to implement a VSS-requestor to request a volume shadow copy. The key component, though, is the VSS-provider, which creates and maintains shadow copies (snapshots). While VSS-providers are included with the latest Windows OSes, software and storage hardware vendors can provide their own VSS-providers. Noticeably, hardware-based VSS-providers of arrays enable high performance and highly scalable data protection of Hyper-V environments. While it took VMware to implement change block tracking to get to efficient snapshots, in VSS it's a capability of the VSS-provider. For instance, the VSS-provider that's part of Microsoft's operating systems does incremental snapshots via a copy-on-write method; that is, when a change to the original volume occurs but before it's written to disk, the block to be modified is read and stored away. 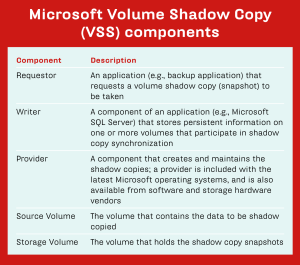 The support for VM image-level backup of Hyper-V isn't as extensive among third-party backup applications as is support for VADP. For instance, IBM Tivoli Storage Manager (TSM) and PHD Virtual Backup don't have support for it at present. Similar to VMware, Microsoft provides its own backup solution for Hyper-V environments with System Center Data Protection Manager (DPM). DPM provides near-continuous data protection for virtual machines hosted on servers running Hyper-V. With advanced features like disk-to-disk and disk-to-tape support, the ability to recover sub-VM objects like files, protection of virtual machines while live migration is in progress, integration into Microsoft System Center, and support for clustered and standalone Hyper-V systems, DPM provides a state-of-the-art product rather than the entry-level product VMware provides with VDR.

Like vSphere and Hyper-V, Citrix provides its own VM image backup application with VM Protection and Recovery (VMPR). A scaled-down version of VMPR that lacks features like scheduling is included with all versions of XenServer. A more advanced version that supports scheduling and automation is available as a paid option. Third-party backup application support for XenServer image-level backup is more tenuous than for vSphere and Hyper-V. Among the backup application vendors that support it are Arkeia Software, CommVault, PHD Virtual Technologies and Veeam Software.

Block-based VM image backup on the hypervisor host, ideally via a backup proxy server, is becoming the preferred way of backing up virtual servers. Maturing backup APIs in vSphere, Hyper-V and XenServer, as well as increasing support by backup applications for these APIs combined with performance and scalability merits, are among the main reasons for its adoption. Because most organizations run more than a single hypervisor (more than 70% of companies according to ESG's Whitehouse) and a mix of physical and virtual servers, multihypervisor support and the ability to support both physical and virtual server backups are important considerations when choosing a virtual server backup application.

BIO: Jacob Gsoedl is a freelance writer and a corporate director for business systems.