In our latest Snapshot survey, a majority of respondents use networked storage. But the number of firms already using 10 Gbps Ethernet and 8 Gbps Fibre Channel may be surprising.

Nearly all Storage magazine readers polled -- 92% -- say their firm is using networked storage. Forty-five percent have one or two storage networks installed, but 27% have more than five separate storage networks. And while it’s no surprise that 4 Gig Fibre Channel (FC) and 1 Gigabit Ethernet (GbE) are the most common networks (60% and 51%, respectively), eyebrows may raise a bit at the number of firms on 10 GbE (35%) and 8 Gbps FC (41%). Responding companies plan to buy an average of 2.9 new Ethernet switches and 2.5 FC switches, which should make vendors happy, but they’d probably be disappointed to see the lukewarm reception Fibre Channel over Ethernet (FCoE) is getting. Positioned as the great consolidator of FC and Ethernet networks, FCoE is in production in 13% of reporting firms, 8% are testing it and 54% checked off “no plans.” The picture gets a little rosier when peering into the future, as 47% can envision a mix of FC and Ethernet running over FCoE as their ultimate storage networking configuration. 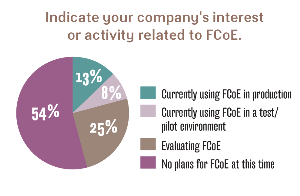 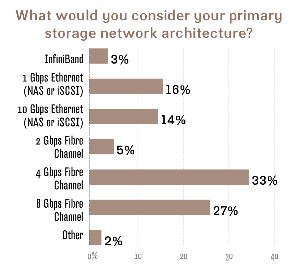 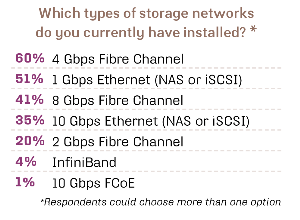 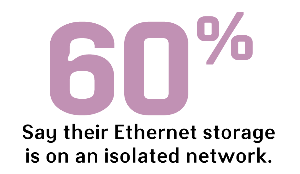 “FCoE is likely two-plus years away and it scares the network engineers. In the meantime, we’ll focus on upgrading Ethernet and upgrading our FC network to 8 Gbps.” -- Survey respondent