Have you virtualized desktops at your company? Find out what our survey respondents have to say about implementing a virtual desktop infrastructure and how it's affected their storage choices.

It's common knowledge that implementing a virtual desktop infrastructure (VDI) requires some creative thinking when it comes to storage. Our latest survey reveals that 42% of respondents have virtualized at least some of their companies' desktops -- a pretty high number given the impact of desktop virtualization, but only about half the number who say they've virtualized servers (83%). Those who have taken the VDI plunge have virtualized an average of 35% of their company's total desktops; but 75% of those companies have 200 or fewer virtualized desktops. Still, desktop virtualizers have been doing some shopping -- 53% bought a new storage system for their VDI project and 34% splurged on solid-state storage. Fibre Channel arrays are the preferred systems, and solid-state was most often implemented in the form of a hybrid array. Nearly half (48%) said they also picked up some configuration or management software to help with the implementation. Forty-seven percent of those who haven't virtualized desktops don't see any particular need for it, but 18% of non-virtualizers say they'll do it within the next 12 months. 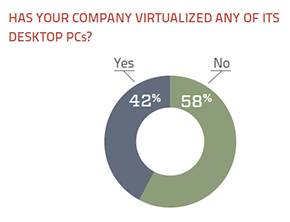 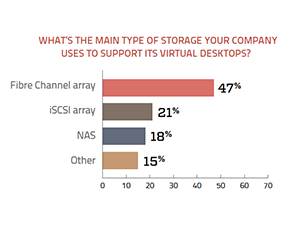 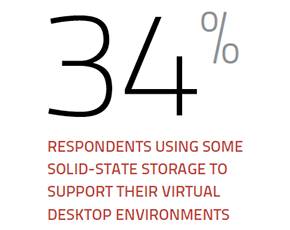