Arrays that combine block and file storage in a single box -- also known as multiprotocol arrays or unified storage systems -- are more popular now than ever before.

Arrays that combine block and file storage in a single box have been around for a while, but it seems as if they're more popular now than ever before with 63% of our respondents reporting at least one multiprotocol array. But most shops have multiple unified storage systems: 44% have two to five systems, while 37% have six or more. Users cite three main reasons for going multiprotocol: more efficient capacity utilization (31%), it's cheaper to combine systems (29%) and maintaining one box is easier than two (27%). Twenty-four percent of users replaced separate block and file arrays with a multiprotocol system, and 61% added a multiprotocol array to their already installed mix of file and block systems. On the question of which type of block -- Fibre Channel (FC) or iSCSI -- to combine with NAS, our group was split pretty evenly: 66% have FC-NAS combos and 61% run iSCSI with their NAS. How's it all working out? Pretty well: On a scale of 1 to 5 where 5 is "very satisfied" our group grading averaged 4.1, with 42% rating their multiprotocol as a 5. 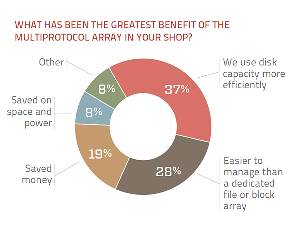 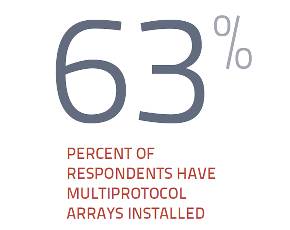