Despite widespread economic woes and intimidating unemployment numbers, the Storage magazine/SearchStorage.com 2011 salary survey revealed a rise in compensation for data storage professionals for the ninth consecutive year. The 266 storage pros who responded to our 2011 survey weren't isolated from the world around them, of course: Approximately half reported tighter IT budgets and acknowledged they were operating in “maintenance mode” -- avoiding any major new purchases or implementations.

Tips on negotiating your salary in today's economy

Still, the remainder of our respondents said they did spend money to save money this year. Investments ranged from multisite data center projects to adding private clouds and auto-tiering, which were all cited as ways storage pros are looking for ROI in 2012.

Each year, our salary survey offers a compelling snapshot of storage pros. Competitive, ambitious, intellectually curious, our respondents are happiest when they're challenged with complex IT projects. And they’re made miserable by business leaders that still -- despite how far they’ve come -- don’t understand IT initiatives as part of the overall corporate strategy. They resent being treated as the emergency rescue squad, garnering appreciation only when companies are in "911 mode." And they thrive in a place where innovation is allowed and red tape is discouraged.

To find out more about the outlook for data storage professionals in today’s global marketplace, drill into our annual survey results here.

This year’s respondents saw a larger year-over-year increase than last year’s crop, who barely managed a 1% increase in pay vs. 2009. Participants were also a bit gloomier last year, predicting their salaries wouldn’t budge in the coming year and might even drop. The current group’s estimated 4% jump would translate to nearly a 10% raise between 2010 and 2012. 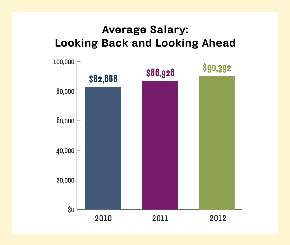 Our 2011 respondents reported salaries that were 5% higher than last year.

This year’s crop of respondents saw a greater year-over-year salary increase than last year’s respondents. They also beat out the 2009 class of survey participants when it came to annual increase in pay.

“Even with the economy the way it is, good resources are being kept within organizations, and if you are good at what you do, companies are always looking for good resources.”

Respondents expressed a high level of satisfaction with their employee benefits in the four categories we surveyed: health, dental, vacation and flex-time. A little more than 60% rated their health benefits as good, very good or excellent.

The majority of respondents (67.9%) said their benefits packages didn’t change compared to last year; 10% cited improved benefits while 19.6% saw them reduced -- not a very encouraging number but a definite improvement vs. the 30% who fell into that category last year. 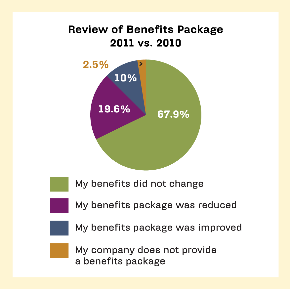 19.6% saw benefits reduced and some reported being asked for higher co-pays.

“I’m being forced to take time [off] instead of getting overtime pay.”

How many terabytes are in your paycheck?

Otherwise, the results weren’t conclusive enough to say that paychecks grew right alongside the amount of data managed.

There was also a steady rise in compensation as it related to the number of direct reports. Storage pros managing small teams with fewer than five people earned $81,608, and the average salary climbed steadily to $122,667 for those managing between 21 and 50 IT team members. 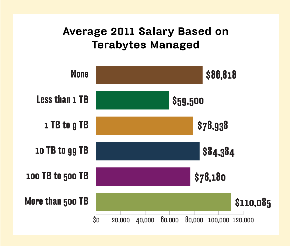 Storage pros managing the largest teams and the most terabytes earned the highest salaries.

Just as with terabytes, bigger budgets add up to higher pay. Managers with budgets less than $500,000 earned average annual salaries of $77,140. Those managing budgets between $1.1 million and $5 million earned $100,740.

Pacific region wins by a nose

Respondents from the Pacific region (Alaska, California, Hawaii, Oregon and Washington) averaged salaries of $95,526, pushing them to first place after the region ranked fourth in last year’s survey. New England, and the Northwest and Southwest regions were bunched closely, finishing second, third and fourth, respectively.

In Canada, data storage professionals reported earning an average annual salary of $85,938, putting them ahead of two U.S. regions. 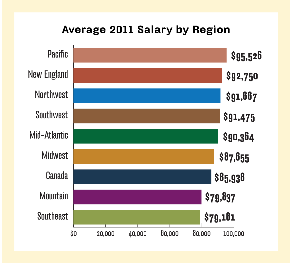 Nearly all our regional divisions ranked closely together in terms of salary; only the Mountain and Southeast regions averaged below $80,000.

“Philadelphia is a small IT community. I have made good connections with people I see again and again.”

In a complex market, experience counts

A warning to newbies: In tough economic times, many companies weed out applicants without diplomas.

Another way to increase salaries was to have one, two or three certifications, with each one boosting earning potential, according to our survey. After three, however, the math stopped working and paychecks leveled off.

IT EXPERIENCE: IMPACT ON AVERAGE SALARY 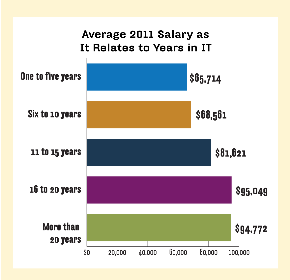 Years on the job count, but the real payoff is in years of dedicated storage experience.

College graduates earn about the same as IT pros who attended college for two years. The highest paid group of survey respondents held Master’s degrees and had more than 10 years of dedicated storage experience.

A little more than 65% of respondents cited salary as the No. 1 factor in their choice of job. Career advancement was the second reason cited by respondents for changing or taking a new job.

When asked about the least important factors in their job choice, benefits (43.3%) and location (25.4%) landed at the bottom of the priority list.

Only 1.3% of respondents voted salary as their least important factor.

RANKING THE REASONS FOR TAKING A NEW JOB 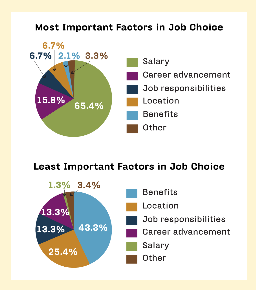 Enlarge RANKING THE REASONS FOR TAKING A NEW JOB diagram.

When choosing a job, salary trumps all other considerations.

“My salary is representative of a commitment the company has to IT.”

The time of their lives

In 2011, survey participants were squarely focused on that most valuable of resources: time. Whether it was the speed at which projects get completed, the hours spent on documentation or red tape -- or too many hours spent in a car and too few at the dinner table -- respondents were made happy or unhappy depending on how much control they had over their time.

Long hours, long commutes and projects with elusive end dates were all reasons for job dissatisfaction. Working at home, the satisfaction in meeting deadlines and seeing results, and the ability to work fast without a lot of higher ups having to sign off on every move were all named as reasons to appreciate their current positions.

Smart peers and respect from the business side of the company go a long way.

“It’s a great place to work. It’s not often that I miss the kids’ soccer games.”

BIO: Ellen O’Brien is the Executive Editor for the SearchStorage.com and SearchCloudStorage.com websites.