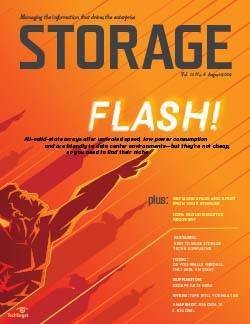 Solid-state storage has made its way into servers, hybrid storage arrays and caching devices, but all-solid-state arrays are an emerging class of high-performance storage systems. The more than 50-year reign of hard disk drives (HDDs) as the main location for primary data is being threatened. With falling prices and improved reliability, solid-state storage is starting to make inroads into the enterprise; and with the addition of solid-state products that complement HDD technology, a number of start-up companies have emerged offering all-flash array products. Although solid-state drives (SSDs) have been deployed in traditional arrays for some years, high performance isn’t guaranteed by simply replacing HDD with SSD. As we’ll see, for best effect solid-state drives and flash memory need to be treated differently from their spinning disk counterparts. @pb The SSD difference Solid-state drives combine flash memory and controller electronics to produce a device that operates similarly to a hard drive. Today, there are two types in ...