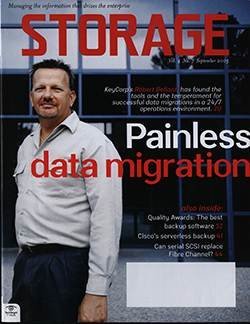 In a perfect world, Alan Hunt would buy only diskless IBM BladeCenter server blades and boot off an EqualLogic IP SAN, simplifying his IT operations. "I like everything to be a standard configuration. If I can have one piece of hardware and build everything off that standard load, it makes my life much easier," says Hunt, manager of operations at Dickinson Wright PLLC, a Detroit law firm. If a disaster were to occur at a remote office, he adds, "I can just ship [a replacement] to the receptionist, walk them through slapping it in" and load the operating system image remotely. But booting blades off an IP SAN has proved difficult; the one software-based iSCSI initiator for Windows that supports booting from a SAN -- emBoot's netBoot/I -- doesn't work properly with BladeCenter. Hunt is shipping a BladeCenter to emBoot in hopes that it can work out the bugs. "I really want this to work," he says. Hunt isn't alone. Vendors also hope the booting issue can be resolved. Disk drives are "the only mechanical thing on the blade, and ...