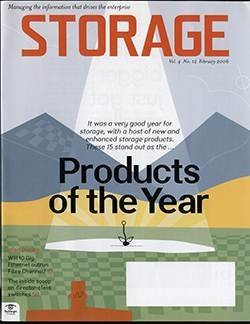 REGARDLESS OF WHERE you stand on the Fibre Channel vs. IP SANs vs. NAS debates, it's worth noting that the first storage systems with a native 10Gb Ethernet (10GbE) connection are starting to ship (see "Speed wars: Fibre Channel vs. Ethernet."). Marc Staimer, president of Dragon Slayer Consulting, says he personally knows of at least five vendors that plan to ship arrays this year with native 10GbE on them. BlueArc, San Jose, CA, is the most recent entrant, with its new Titan 2000 series announced earlier this month. Both the new Titan 2100 and 2200 series come with 10Gb/sec Ethernet ports. In the first release, the 10Gb/sec Ethernet pipe is used for intercommunication between clustered Titan gateways, and the company will release "blades throughout the year that support a number of connectivity options," says Jon Affeld, BlueArc's director of product marketing. Those blades will probably support 10Gb Ethernet--or possibly InfiniBand--to the host. Whatever the case, with a new internal backplane capable of carrying 40Gb/sec of ...