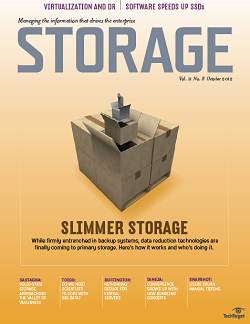 As more and more servers are virtualized in data centers, deduplication needs to play a bigger role in protecting their data. "Improving data backup and recovery” and “Increased use of server virtualization” tied for the top priority in an IT spending survey conducted by Enterprise Strategy Group in 2012. While server virtualization regularly occupies the top spot, it’s interesting to see backup listed there, but not surprising. As server virtualization adoption continues, users are discovering that while it solves many problems, backup isn’t one of them. VM sprawl and backup I/O It’s arguably too easy to create new virtual machines (VMs), often resulting in “VM sprawl” and a seemingly unending stream of new virtual hard disk files. With only a few mouse clicks, a new VM is created and large chunks of storage are consumed. Historically, backup was one of the most I/O-intensive operations for a server, but because physical servers were usually underutilized, they had I/O, memory and compute resources to spare. Server ...