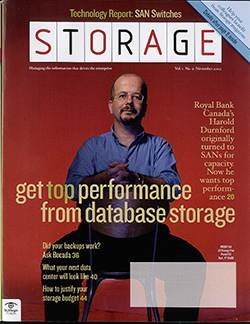 Last month I came clean about the creeping paranoia I've caught from storage vendors. Shortly after typing that, I was sitting in the audience at Storage Decisions 2002 in Chicago listening to HP's Howard Elias and EMC's Joe Tucci fall all over themselves to say nice things about each other's companies. Geez, I said to myself, you're just one cynical old guy. Maybe you should phone in a rewrite before they change the name of the magazine to Curmudgeon? Fortunately, I resisted the urge, something I can't say either EMC or HP did, as they had barely unpacked from the conference when lawsuits began flying, seemingly growing out of that whole API swap thing. It's not paranoia when everyone's really after everyone. Suddenly, "the next step forward" became a big step backward. On an entirely different note, some of you have been getting your magazine with hideously colored triangles in the upper right corner of the cover. That means you are not yet a subscriber to this magazine. You have to deliberately request it to become one. And ...