Hybrid storage arrays vs. all-flash arrays: A little flash or a lot? 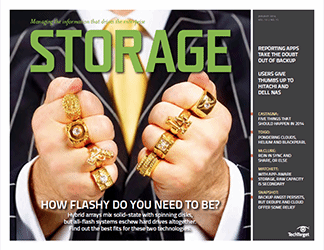 Now that solid-state storage prices have dropped, more vendors offer all-flash arrays; but are they really much better than hybrid storage arrays that mix flash with spinning disk? Comparing technology systems has traditionally relied on a "price-to-performance" analysis that tries to normalize system differences into an apples-to-apples comparison. With respect to storage, the advent of flash (solid-state) drives created a situation where IT buyers had to decide between price and performance. Flash storage offered blazing speeds, but at a very high cost per gigabyte ($/GB). At the other end of the spectrum, multi-terabyte hard disk drives (HDDs) are very economical, but with just around 75 raw IOPS per drive there better not be much work in the workload if that's where your data is located. HDDs have an advantage in $/GB, while flash has an advantage in $/IOPS. Hybrid arrays are intended to balance that equation. By adding a thin slice of flash storage to an array (i.e., 2% to 5% of total capacity), available IOPS may double ...