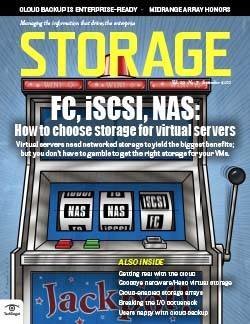 Processors get faster, networking tech takes it up a notch and bus designs keep up the pace, but they may all be dragged down if we can’t find a fix for slow I/O performance. There’s no question I/O is the next frontier the computer industry must conquer. We’ve met the compute challenge reaffirming Moore’s Law over and over again as the industry doubles processing power every 12 months to 18 months. Memory speeds have also kept pace with the CPU, so processors and RAM can feed each other at similar speeds. In the realm of networking, the technologies seem to enjoy a big kick every three years to five years. With 10 Gigabit Ethernet (10 GbE) in the volume implementation stage and 40 Gig parts already available, we’re swimming in bandwidth. But all those advances may be held up by one laggard: I/O. It’s been causing havoc with application performance and putting a dent in productivity for years. To see why, we need to get down to basics. I/O is the transfer of data to or from a device that’s handled by the file system or operating...