ATA Drives Move Up the Ranks 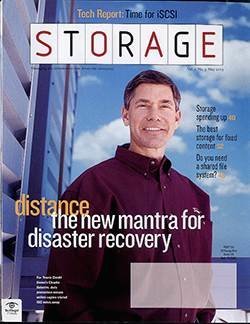 The nod has been given to ATA drives by EMC, which is now giving customers the option of buying disk array enclosures (DAEs) for their Clariion CX400 and CX600 arrays equipped with ATA, rather than the usual Fibre Channel drives. The result is an array that costs about 60% less than its Fibre Channel-equipped brethren, according to Michelle Hanson, spokeswoman for Dell, which resells the array. To wit: In cost per gigabyte terms, a 3.7TB Clariion with Fibre Channel drives costs $19.83/GB, while an ATA-equipped version would only cost $8.61/GB. Of course, the performance isn't there--Dell's Hanson expects it's around one-fourth of a Fibre Channel array's--but the software functionality is. "All the storage functionality that already exists on the Clariion has been applied against ATA drives," notably SnapView and MirrorView, says Jay Krone, EMC director of Clariion product marketing, who claims that "a big chunk of the Clariion base is buying it to take advantage of mirroring," as well as disk-based backup. High-performance ...