HDD vs. SSD: Is there room for disk in a solid-state world? 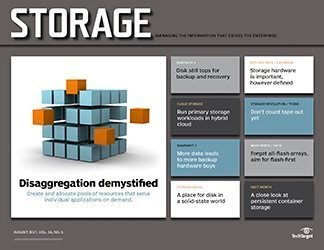 Hard disk drives are hard to like. This 60-year-old device is slow and accesses data clumsily, but it stores volumes of data at a price that's hard to beat. Since the middle of the last decade, solid-state drive advocates have argued that SSDs would completely displace HDDs over the following few years. Yet here we are in 2017, and the HDD vs. SSD controversy continues. HDDs still play a greater role than SSDs in PCs and servers, and HDD unit shipments aren't much below 2005 levels. Why hasn't flash SSD taken over the market? In a nutshell, it's because HDD replacement isn't how to make the best use of SSD technology. Figure 1 shows a continuum of memory and storage that fits into a tidy hierarchy. HDD vs. SSD technology plays a significant, but not the only, role in that hierarchy. Let's walk through this continuum and perform a detailed analysis to see why. The chart represents price per gigabyte on the horizontal axis and bandwidth on the vertical axis. The axes are labeled in orders of magnitude -- 103 = 1,000, 104 = 10,000,...