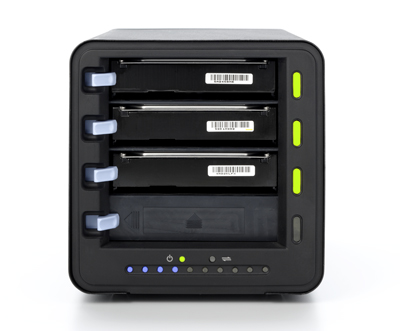 Data Robotics, a new storage startup just coming out of stealth, has announced both itself and its first product today. Data Robotics was formerly working under the name Trusted Data, and is a venture led by BlueArc founder Geoff Barrall. The product is a consumer storage unit called Drobo that Data Robotics says it intends to scale up into the enterprise market.

Why should you care? Because if Data Robotics has its way, Drobo could change the concept of RAID storage.

Here’s how it works: the Drobo box, a black cube that will fit on a desk, contains four disk bays. Any SATA disk drives from any manufacturer of any size can be added and the box will automatically stripe data across them; the box uses no management software, and instead has a system of lights which show red, yellow or green. If it’s red, replace the disk. If it’s yellow, the disk is filling up. Green and all is well.

When disks fill up, they can be swapped out for a larger size and data is restriped automatically, using RAID levels that change according to the disk capacity left over. For example, in a system with a 120 GB, 250 GB, 500 GB and 750 GB drives installed, 120 GB of each disk would use RAID 5 striping in a 3 + 1 configuration. As the 120 GB drive fills up, the system would put the remaining capacity into a 2+1 configuration, and then finally into a mirrored pair (in case you’re doing the math at home, the final 250 GB of the 750 GB drive would remain empty in that scenario).

Of course, you may have to understand a bit more than that to know that you shouldn’t take the 750 GB drive out to replace it without enough capacity left in the remaining disk slots to absorb the data while it’s missing. And Stevenson said so far Drobo isn’t pursuing any distribution deals with Best Buy, instead presenting this as an alternative to homegrown RAID arrays for Bit-Torrent addicted power users or “prosumers”, professional digital photographers, and small businesses where, to quote Stevenson, “the IT guy is Frank’s son.”

One such company is Michael Witlin Associates (MWA), a five-man company that produces corporate events in Silicon Valley. Its owner, namesake and executive producer received a free eval copy of Drobo and says it’s been humming along nicely in the few months he’s tested it, in contrast to a Maxtor-drive-based RAID 5 array he struggled to manage. Every so often partitions on that array would “drop off” in Witlin’s user interface, “And I could never figure out what the problem was,” he said. Drobo plugs in via USB 2.0–something Witlin said he prefers–and “there’s nothing I have to do after that.”

Meanwhile, Data Robotics is aiming to take its approach to RAID to the big time. Stevenson envisions a Drobo-ruled utopia in which lower-paid “Tier 3” IT admins also manage Tier 3 nearline storage, automatically striped using Drobo’s RAID method, who merely need the expertise to observe and act on a red, yellow or green light.

“Their algorithms could have a huge impact on enterprise storage, as well,” wrote Brad O’Neill, senior analyst with the Taneja Group in an email. “If you can begin to create heterogeneous arrays right down to the drive level, with no interruption of availability or performance, you’ve done something extremely disruptive to the market–capacity upgrades would become the equivalent of simply plugging in drives, waiting for a green light, then adding more. I could imagine large service providers using drive robots running swaps and upgrades not unlike tape robots do today. ”

In the interest of full disclosure, O’Neill’s not just an enthusiastic supporter of Drobo’s vision, but also of their bottom line: “I have a Drobo plugged into my laptop right now via USB providing 700 gigabytes of…storage…with four different drives of varying capacities and vendors,” O’Neill confessed. “I [also] bought four of them and gave them to my friends.”

(His friends are probably used to those special Christmases with Brad…)

Nigel - 9 Jul 2007 4:05 PM
Hi Beth, Im not so sure the theory and the practicals behind the features of the Drobo are so new and unique. Even in the enterprise market..... The Compaq/HP EVA line of storage has allowed storage admins to mix and match larger and smaller drives within a disk group, varying RAID levels within the same disk group, dynamically re-balancing spindle usage when disks are added or removed to the disk group... Its also as simple as plugging in new disks and waiting for the green light and then adding more. Or even pulling some out, waiting for the green light and continuing...... And despite the EVA being way ahead of its time, neither Compaq nor HP have been able to successfully leverage its full potential over the competition. Something that Data Robotics may also struggle with in the enterprise space. Its a tough old world in enterprise storage with long established vendors (and probably cartels) and deep rooted beliefs held amongst enterprise users - they tend to like the status quo. Looks good for the emerging home market though. Nigel
[-]

Melvin - 4 Aug 2007 9:03 PM
When Drobo releases a FireWire version, I will more than likely purchase it. For serious video editing, FireWire is a requisite primarily because of its "Peer-to-Peer" architecture in which the peripherals are intelligent and can negotiate bus conflicts to determine which device can best control a data transfer.