This past Sunday, a friend of mine and I took a trip to a staple of most New England childhoods (mine included): Boston’s Museum of Science. As we explored the exhibits, a surprising number of which remain unchanged since I was a kid, an exhibit called “The Computing Revolution” caught my eye for the first time.

This exhibit was kind of the inverse of the rest of the museum — while the main exhibit halls contained relics unchanged since my childhood, the computer retrospective introduced machines I remember using as a child to the museum. I’ve never had the experience of seeing things I’ve actually used displayed in a glass case as historic artifacts — but that’s computer time for you.

Luckily I also had my camera with me, and the Museum allows photography — so I can share some of this trip down memory lane with the people in my audience I know will appreciate it.

Photos after the jump.

Whirlwind, an MIT mainframe from the 1950’s.

My impersonation of a 1950’s mad scientist, which is what I always think of when I see this kind of machine. Note: I am not an actor.

A highlight of the exhibit for yours truly: this early IBM hard drive holds a whopping 1 Gigabyte.

Univac computer room from the 1950’s. The plaque with this exhibit, which is kept behind a plexiglass picture window, reads “This is as close as most people got to a computer in 1952.”

Photo of Raytheon in the 1970’s. Those are all IBM machines, with what look like reel-to-reel tapes. 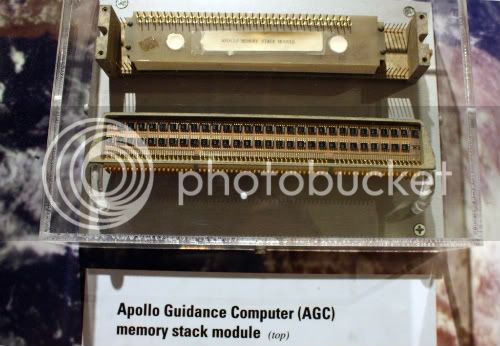 I mean no disrespect, but look at the size of that thing.

Industrial design doesn’t get much more 70’s than this.

The plaque makes it fairly clear what this is, but I don’t even have a guess as to how it would actually work.

Now’s the part where I get to feel old — on the left is an IBM PC much like the one I used at home as a kid; on the right, the kind of Apple computer most children of the 80’s probably recognize from their school computer lab.

I now realize it’s there because of the virus, but I have to admit I laughed out loud when I first saw this floppy drive in a glass case.

Also, his picture is what would be in the dictionary, if it had an entry for “mainframe guy.”

Believe it or not, this is a modem. Note the rotary phone.